Delhi-NCR Weather Report Today 05 August 2022: The sultry heat in Delhi-NCR is troubling continuously. However, there is relief after intermittent rains, but after that the outbreak of sultry heat increases again. Meanwhile, it rained in some areas of Delhi on Thursday. According to the Indian Meteorological Department (IMD), 7 mm of rain was recorded at Delhi’s Safdarjung Observatory from 8:30 am on Wednesday to 8:30 am on Thursday.

According to the data of the Meteorological Department, Delhi has received 312 mm of rain since June 1, while the normal rainfall is 307.7 mm. On the other hand, the Meteorological Department has predicted cloudy sky and normal rainfall on Friday as well. The weather is forecast to remain similar on Saturday, while light rain may occur on Sunday and Monday. After this, on August 9 and 10, the sky will remain cloudy and there is less chance of rain. During this temperature and heat will increase. The weather in Noida and Gurugram is going to be more or less similar.

What will the weather be like in Delhi, Noida and Gurugram on Friday? 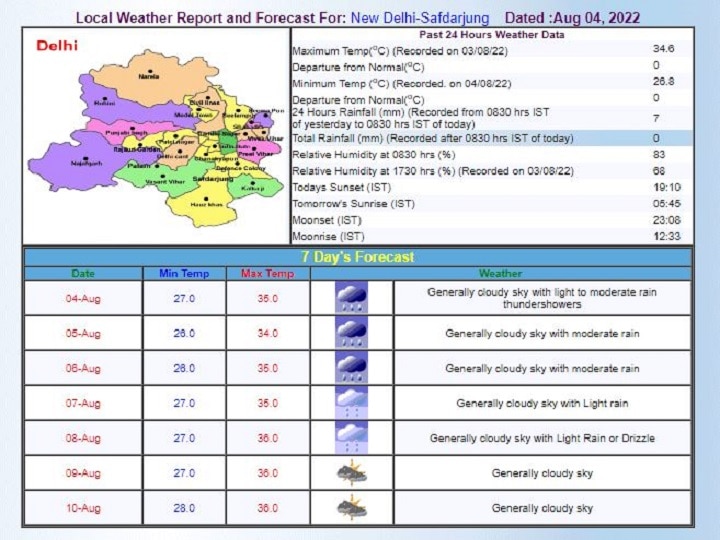 Also read- Noida News: In Noida, there will be a fine for giving food to street dogs, circular of the society, know- the answer of the authority

A horrific road accident in Kanpur countryside, speeding car collided with a truck parked on the side of the road

Credit Card Benefits: Credit card users get many benefits! Learn how you can take advantage of it