Sara Ali Khan: Actress Sara Ali Khan, who stepped into the Bollywood industry with the film Kedarnath, is known for her cool style. Often photos and videos of Sara Ali Khan keep making headlines on the internet. Recently, a latest video of Sara Ali Khan has surfaced on social media, in this video Sara is being trolled a lot because of a carry bag. Let us know why this carry bag of Sara has become a topic of discussion after all.

Sara is getting trolled about this carry bag

Actually, a latest video of Sara Ali Khan is becoming increasingly viral on social media. In this video you can see that Sara is seen going for a workout session in her gym outfit. At the same time, Sara has also taken a carry bag in her hands during this time. Sara’s name is written in big letters on this bag. Seeing this bag of Sara Ali Khan, it seems as if there is no stuff in it. What was it then, people have started trolling Sara Ali Khan to Ali Khan fiercely about this empty bag on social media.

People are making different types of comments on social media regarding this video of Sara Ali Khan. Under which an Instagram user has written that ‘Like Sara Ali Khan, there is a bag in our house in which we go to get vegetables’. Another user has said that ‘all these just keep walking around with empty bags’. Not only this, a user even said that ‘just show them off by showing the empty bag’. 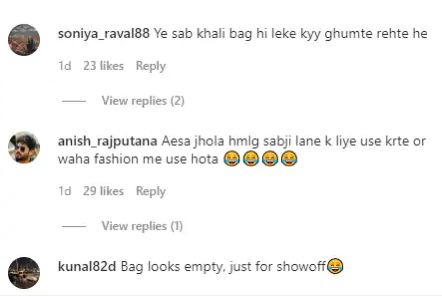 Anil Kapoor had refused this biggest franchise film, now told the reason behind this decision

Vikrant Massey: Vikrant Massey got his first acting offer outside the bathroom, the actor told why the offer was accepted